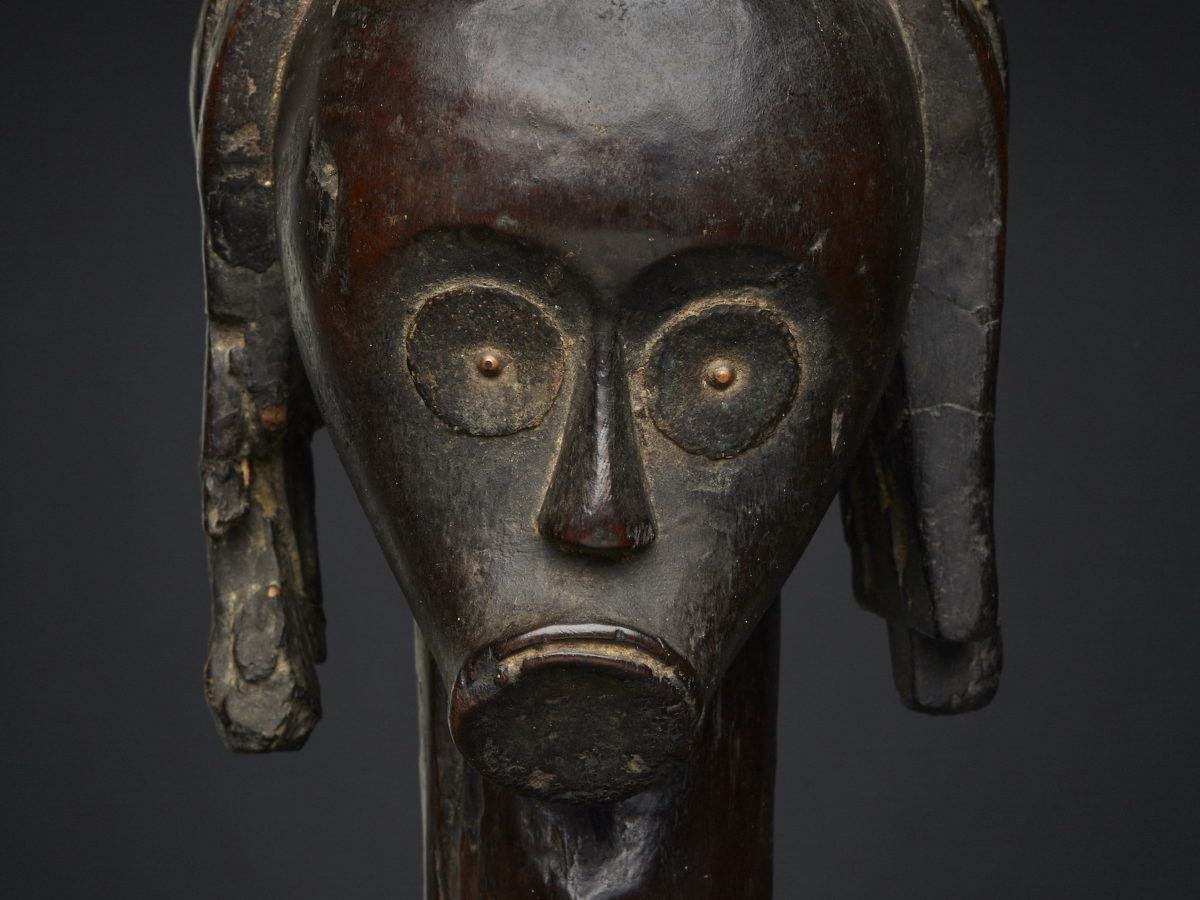 The byeri cult was a cult among the Fang that honored ancestral spirits.  In a broad sense, the word “byeri” means “ancestor” and figures with the same name were made to be placed on the bark boxes called „nsek-byeri“
that contained the skull(s) of an important family member(s) (man or woman). Very few people were allowed to see the contents of the nsek-byeri and the privilege was usually given to one of the mature sons of the family
who is given the responsibility of caring for the byeri objects and maintaining proper rituals. Non-family members were never allowed to see the contents of the nsek-byeri.

„It is tempting for historians of African art to place the various Fang sub-styles and the types of objects they produced within a chronological
perspective, notably when it comes to solitary heads. Given the present state of our knowledge, this is a most hazardous exercise. The historical
precedence presumed for these heads as compared to whole byeri figurettes, is unfounded. One has simply noted that the majority of such heads that are known and documented, come from the right bank of the Ogowe River, in its middle course, in the regions of Abanga, Okano and the
Gabon estuary. No head has been localized further to the north, that is, in south Cameroun. One may suppose that at least in the nineteenth
century, solitary heads coexisted with full-size statuettes in many Betsi  and  Nzaman villages  of Woleu-Ntem.

Certain of these heads have a very characteristic coiffure, with a „helmet of tresses“ of geometric design such as this by indication very old head, framing the face with a markedly domed forehead, very precisely recalling the hairpieces always worn by both men and women, made from rattan and vegetal wadding, and decorated with cowries, glass beads, and often with shirt buttons of European making (afakh or nlo o ngo). The Fang heads, certain of them important masterpieces (such as this one), are often particularly finely sculpted works, in contrast to the figurettes whose subsidiary parts (hands, feet, sometimes limbs) are
often left in an sketchy state, with only the upper-body occupying much of the sculptor’s concern. (Text reference – L. Perrois)

This truly beautyfull head has an old african („local“) repair done to the braids. It still contains its original copper eyes with a dark patina.

This exceptional „fang head“ was found and sold to the collection by Mr. Issah Mbohou, Bruxelles.